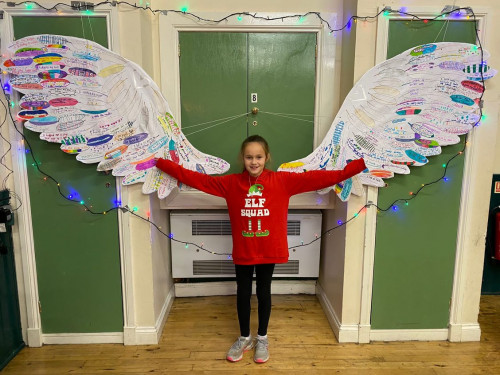 A group of Dunfermline Churches launched the second year of #angelseverywheredunfermline with the arrival of two sets of wings; one at the Louise Carnegie Gates to Pittencrieff Park, the other at the Queen Anne Street entrance to the Kingsgate shopping centre.

Rev MaryAnn Rennie explains that, “This year we picked up the theme of angelseverywhere as an opportunity to try and encourage a little lightness into all of our lives, and as a reminder of the kind of angels that may be in our midst.”

The group asked Fife College if they would be willing to make angels wings that others could stand in front of for "selfies". Dennis Savage and his team at Fife College said "yes", and what they have created is perfect!

The project continued to grow further as over the next few weeks others said "yes". The Kingsgate Centre offered a unit to display children's angel artwork. Dunfermline High School created a series of photographic images and these were shared in various forms. And Fife College gave a third set of wings that appeared over the weekend.

Rev Muriel Willoughby describes it being, “great to see the variety of folk who dropped into the unit from teachers coming to see their class work, the centre security guard, a Tesco employee who is a Christian and was glad that we were taking the opportunity to share the Good News, to lots of families with children coming to see their handiwork.”

Rev Mike Weaver highlights that, “the team who have met and worked on this has not had to be wholly minister led and it's wonderful to see cross church working, and of course the buzz from those who have 'delved' into the Kings Gate centre. My prayer would be for more of this shared work in the community, encouraged by ministers growing in relationship and our "congregations growing in appreciation of one another.”

There are other surprises to come. But in the meantime the hope is that residents and visitors to Dunfermline will take some pictures and post them to Instagram and Facebook with the hashtag #angelseverywheredunfermline

The churches are very grateful to all those who have said "yes". And look forward to expanding this and other shared mission initiatives in future, as to quote MaryAnn, “there is lots of hope to be shared”!

Angels are Everywhere by Nancy Crossman
Angels walk among us,
But they’re very hard to see.
No wings or halo do they have,
They look like you and me.

The thing that makes them different,
Is the kindness that they show,
To each and every human being
Everywhere they go.

When a homeless person reaches out,
And most of us rush by,
The angel will not question him,
It doesn’t matter why.

Angels don’t’ see colour or creed,
To them we’re all the same
An open mind is a beautiful thing,
And it’s their claim to fame.

Angels never need reward,
For the service they provide.
Recognition not what they seek,
Their conscience is their guide.

Take a look inside yourself.
Could there be an angel there?
You may not have to look too deep,
Cause angels are everywhere.